YES! We are Open!

Petunias Past and Present

qaPetunias are easily the most popular annual flower (for sun) in existence. The first wild petunia discovered was way back in the 1500’s by Spanish explorers in South America. These explorers found a low growing and lanky plant that had tiny white-flowers. It was called Petunia axillaris. In the local Tupi-Guarani language, it was called Petun, roughly translated “a kind of tobacco that doesn’t make good smoke”. Due to its insignificance the wild petunia wasn’t collected. Then for nearly 300 years wild petunias went unnoticed while Argentina was under Spanish control (exploration by outsiders was forbidden).

In the 1800’s Argentina gained independence and opened up its borders for all manners of trained professionals to explore the land. One of those professionals was James Tweedie, a botanist from Edinburgh, Scotland. During his time exploring the Americas he collected the little white Petunia axillaris and discovered the purple flowered Petunia violacea. Tweedie returned the two species to Europe in the 1820’s. Those two species are the parent stock of all modern petunias.

Thanks to Tweedie’s discoveries, Europeans started cross breeding programs that created larger flowers in new colors, scents, and even double blooms. The first hybrid petunias in the United States were developed in the 1890’s by Mrs. Elizabeth Crane Gould of California. Along with her husband, Mr. Thomas Gould, she created various strains of petunias but their most popular was the ‘California Giant’ (Petunia hybrida superbissima) strain. Their petunias were so popular that they were included in the display gardens at the Chicago World’s Fair of 1893.

Modern petunias can thank their continued popularity to the summer of 1944. That year a severe drought throughout the United States killed record numbers of annual bedding plants. In place of water hungry annuals, gardeners turned to drought tolerant petunias. The sudden popularity incited hybridizers to develop new cultivars. In 1953 PanAmerican introduced the first truly red petunia called ‘Comanche’. By the 1960’s, petunias were the number one bedding plant in terms of sales and number of plants produced. Ball Seed Company introduced the Floribunda class in 1983. 10 years later in 1993 the first trailing petunia was discovered by Kirin Brewery (a plant breeder for a Japanese beer company). The vigorous purple petunias were named ‘Wave’ and a new class of spreading petunias was created. It’s hard to believe from two species collected by a botanist in the 1820’s now exists hundreds of varieties of petunias!

· Grandiflora’s first appeared as far back as 1881 as result of a multiflora mutation. They’re characterized by having fewer, but larger, showy flowers. The grandiflora hybrids of today were redeveloped in the 1950’s and are easily the most popular variety on the market. The blooms on grandiflora petunias measure 3”- 5” inches across and can be single blooms or ruffled doubles. Some grandiflora’s have a cascading habit but most are upright plants that develop over the summer into large mounds of flowers which are 12” – 15” in height. Grandiflora petunias perform best in moderate summers without excess humidity or moisture.

· Multiflora’s are the oldest petunia variety. These have a more compact growth habit but are more prolific bloomers than grandiflora petunias. Their strong stems make

· Milliflora petunia varieties produce masses of 1- to 1 ½-inch blooms on miniature plants. Mature size of the plants is generally about 8 inches tall and wide. Milliflora petunias bloom early and are often grown in containers or hanging baskets. They tolerate harsh weather compared with grandifloras and multifloras. No deadheading required either.

· Spreading, also called Wave, are petunias with blooms that measure 2” across. The plants typically spread 2’ – 4’ by the end of the season and look great in containers or as ground covers. They tolerate heat and drought fairly well. To encourage new growth and branching, “pinching” is required. On long stems that look “leggy,” pinch the stem back 1” – 2”. These growth tips will be tender and can be pinched using your forefinger and thumb, or a scissors if necessary. Once the branch is pinched back, new growth will begin to develop, creating the spreading form that Wave Petunias are known for.

Stay tuned for further Petunia information, including the varieties we carry as well as how to care for them so they look great all summer! 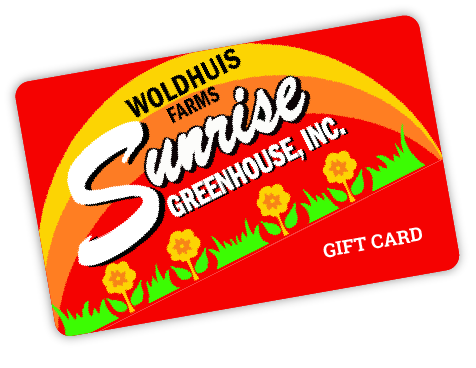 We collect nonpublic personal information about you from the following sources:


We do not disclose any nonpublic personal information about our clients or former clients to anyone, except as permitted by law.

©2019 Woldhuis Farms. All rights reserved. Website design by VIA Marketing